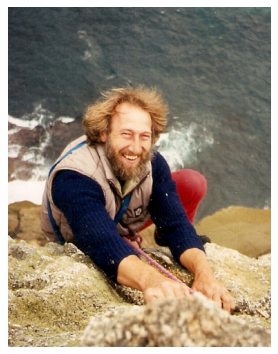 I have been drawing pictures all my life, but I was brought up in a work culture where you were expected to work for your living and the job was most important. Consequently I have not previously allowed myself enough time to develop my artwork.

It has not been an empty journey, however. My free time has been shared between my other  important pursuits of home, rock-climbing, climbing related work for The British Mountaineering Council, artwork and music.

I have, over 40 years, concentrated on illustrating rock-climbing guidebooks. That has generated over 400 pictures and maps etc. in approximately a dozen books. I have also done other artwork during this period including illustrations for a book of short stories; most of my works were  mainly in black and white to make the most of my limited time.

Illustrating and helping to write and check guidebooks helped to fullfill my wish to give something back to the climbing world which has given me so many experiences, pleasure and friends. I believe that I would still be illustrating books had technology not developed the digital camera. The last book I illustrated was the rock-climbing guidebook for Stanage published in 2002 and contained over 100 of my drawings, of which critics suggested that they were the best set of crag drawings ever done for a British guidebook.

I have worked part time for a national charity, gradually reducing my time until my work was ended by redundancy following the collapse of world economies.

Finally finishing work gave me enough time to address my artwork with a more committed approach than had previously been possible.

Watercolour is not the easiest medium to work with, but the challenge can be very rewarding.

I am not too concerned with classical techniques nor do I pursue any standard method for the medium. I am completely driven by the picture. My great wish is that I can execute a satisfactory image of what I saw, or where I was, or something that some people will recognise as having been seen but previously not noticed. I also like popular places with, I hope, a new look at what may have been missed.

From climbing, I have a love of mountains, crags, moors and isolated places but I am equally interested in the more benign environments which the majority of people enjoy.